About Mandasa In Brief

Mandasa: Historically once known as Manjusha, it’s a small town in Andhra Pradesh on the East Coast of India, its long corridor is adorned by the virgin beaches of the Bay of Bengal in the east, guarded by the majestic  Mahendra hills in the West, that traps the gentle wind of the sea during the steaming heat of the summer for its people. It shares the borders with the Jalanthra & Budarsingi Jamindaries in the North and Tharla & Parlakhemundi in the South.

Manjusha: In Sanskrit Manjusha is ‘A Box’ and in Hindi it is ‘Jewel Box’ but the word ‘Manju ’ in Sanskrit meant “beautiful”, so we wonder whether in ancient times ‘Manjusha ’ indeed represented ‘a beautiful jewel box’. The Royals however, had a different thought; the records suggested Manjusha meant ‘a beautiful dawn’. Thus it is reasonable to assume that the word ‘Manjoosha’ may have evolved from the combination of words ‘Manju ’(beautiful) and ‘Usha ’ (dawn). But how it came into being is a mystery. The legend is that Raja Panchanan Vaman Singh Deo, the youngest son of a Panchala (present day Punjab) a Rajput king abdicated his throne and left behind his kingdom to his uncle and took up a life of an ascetic and wandered onto Mahendragiri for penance. No record exists of why such a long journey for whatsoever sin he may have committed, leaving the closer by Himalayas and all the way came down South east, some 1500 miles away. He stayed as a hermit, meditated and reclused himself from the population at large. One day after a long and deep meditation the Raja (Panchanan Vaman Singh Deo) opened his eyes and saw a rising Beautiful Sun’ shining over the Bay of Bengal. He was mesmerized and soon he set about in establishing a new kingdom in 1206 AD, and he named it ‘a beautiful dawn ’ or ‘Manjusha ’. People were born and died passing from one generation to another and years had passed by from one empire to another leaving little trace of this place in the historical time scale until after the establishment of British Empire. Manjusha then was in Ganjam district of the then Madras Presidency. Later when Orissa state was formed in 1936, Manjusha, silently changing itself into Mandasa, became a part of Vizag district and presently the Srikakulam district of Andhra Pradesh. 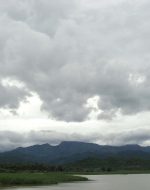 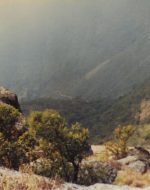 On the way to Mahendragiri 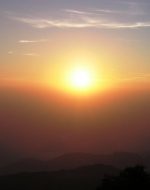 Sunrise sight from the top 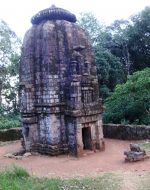 Shiva Temple on the top 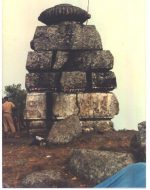 Bhim’s Temple on the top

Greater Mandasa: The name ‘Greater Mandasa’ was realized to arbitrarily encompass Mandasa and the surrounding villages so that their social lives could be shared by a broader population.

Here is some general and important information about Mandasa to showcase its presence:

How to reach: There is a small railway station, namely, Mandasa Road, 5Km away from Mandasa. Only passenger trains stop there. The Express/Super express/Mail trains stop at Palasa (17 Km from Mandasa) and Sompeta (20 Km from Mandasa); The nearest air ports are, Visakhapatnam (in Andhra Pradesh) and Bhubaneswar (in Orissa). By bus or car one can reach from towns like Palasa, Sompeta or Itchapuram (in Andhra Pradesh) and Parlakhemundi or Berahampur (in Orissa).

Educational Institutions: It has three elementary primary schools, one high school established in 1905 by Royal family and named as Sri Raja Srinivasa Memorial Zilla Parishad High School (2) and a Junior Govt. College, Vivekananda Vidyanikethan, Suryodaya Public School, Vivekananda Degree College; An Oriya library, reportedly the oldest (about 115 years) in the World; A general library is also present in the town.

Temples: There are many temples in Mandasa. Almost every street in Mandasa has at least one temple. All nearby villages have more than one temple. It is noteworthy that there are several age-old temples in the Greater Mandasa area which are of great archaeological and mythological significance such as the temples at Mahendragiri (above 5000 feet high), Pottangi, Baruva, to name among many. Although the presiding deities of Mandasa Royal family are ‘Ma Khillomonda’ and ‘Lord Vasudeva’, the past Kings of Manjusha however were also responsible for building several beautiful temples including Balaji mandir, Khilloi Raghunatha mandir, Narasimha Matham, Varaha Matham, Rajagopala Matham, Jagannatha Vallabha temple, Vallabha Narayana Temple, Ratti, a name a few.

Little lakes and ponds: A large number of ponds were dug by the kings of the past. Gopal Sagaram, Kotta Cheruvu and Gunna bondho, Lingala bondho, Jenna cheruvu, Ummaguru bondho, to list a few. They are all well maintained till today and do not become dry even in the summer months. They are useful for irrigation of nearby paddy farms, for taking a dip or swim by adults and children alike.

Recreation: In the evening time people visit Sagaram to enjoy the scenic beauty of the surroundings. There is a Movie theater, exhibiting mostly Telugu cinemas, Haripuram, Marpu Padmanabham Memorial Library and Oriya Library.

Flea markets/ Hatto/ Santha: In Mandasa every Monday a large number of sellers including nearby merchants, farmers and tribals display their produce. Both sellers and buyers eagerly wait for that occasion every single week without fail. This traditional market has been in operation for the past several decades. There is of course, a regular bazar selling fruits, meat, fish, locally produced vegetables etc. on a daily basis.

Rivers: Sunna Muddi, Mahendra Thanaya rivers originate from the Southeast side of Mahendra hills and flows through a vast land irrigating forests, paddy and other fields before joining the Bay of Bengal.

Mountain trekking: Mahendragiri with a height of about 5000 feet is an excellent site for mountain trekking. Because these mountains are habitat for almost all wild animals except lions and reportedly elephant herds chase and kill humans, interested individuals and small groups until recently, used to trek Mahendragiri along with thousands of pilgrims during Shivarathri festival (February-March). However, since last couple of years the visits by trekking groups from far off places, throughout the year have considerably increased.

Nearby attractions: Water falls/ Hot springs: There is a magnificent waterfall (about 60feet) at Gandahathi (about 20 Km), and a grand hot (Sulphur) spring at Thopthopani (about 20 Km). Gandahathi is routinely visited by wild animals including tigers and elephants. Both are close to Mandasa but belong to the neighboring Orissa state.

References: All the information described in this website since 1991, are gathered from (1) several elders in Mandasa, (2) the translated articles from the most relevant book in Sanskrit, namely, ‘Manjusha Raja Vamsanu Charitham’ written by Pandit Sri Yogeandra Misra Sharma of Puri in 1915 (We are trying to link or include a scanned copy of the book in a reduced form in our site pretty soon for your reference), (3) a few informative articles from the Souvenir published on the occasion of Sri Raja Srinivasa Memorial Zilla Parishad High School Centenary celebrations held during 11.30.2003 to 12.1.2003. Attempts are also being made to display all the articles published in the souvenir in our website. We also gratefully acknowledge the support from the Mandasa royal family members especially Col. (Ret’d.) Meherban-i-Dostan Raja Chatrapathi Singh Deo and his brother, Rajkumar Bikram Kesari Singh Deo who provided useful information about the history of Mandasa kingdom, its rulers and their contributions. GM. Com also conveys sincere thanks to countless individuals from India and abroad for their valuable comments and for providing rare photographs. Some other References: https://plus.google.com/photos/116800063046073596921/albums/5399506241287612257?authkey=CJ2rxvTlk-jwE; https://dtctreks.files.wordpress.com/2009/11/dsc02867.jpgs. Note: If anyone has any additional information, please WhatsApp to +91 8096019686email us (admin@greatermandasa.com or contactus@greatermandasa.com).