Earth, our home, is the third planet from the sun. It's the only planet known to have an atmosphere containing free oxygen, oceans of water on its surface and, of course, life. Earth is the fifth largest of the planets in the solar system.

Wildlife are taking back their space as tourism dies down and people are forced to stay indoors during the novel coronavirus pandemic.

A South African lion pride, for instance, has been spotted taking a sunny cat nap in the middle of a road, given the lack of traffic.

Workers at the country’s Kruger National Park made the discovery of at least 11 lions sunbathing.

According to the park’s tweet, this family of lions are residents of Kempiana Contractual Park, an area that Kruger tourists don’t usually see.

“This afternoon, they were lying on the tar road just outside of Orpen Rest Camp,” the park wrote, along with the photos taken by ranger Richard Sowry.

Kruger visitors that tourists do not normally see. #SALockdown This lion pride are usually resident on Kempiana Contractual Park, an area Kruger tourists do not see. This afternoon they were lying on the tar road just outside of Orpen Rest Camp. 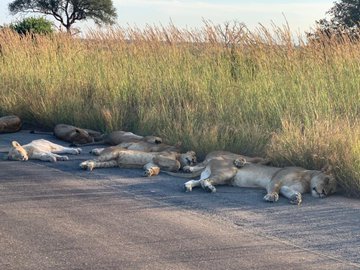 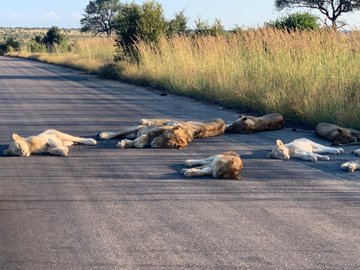 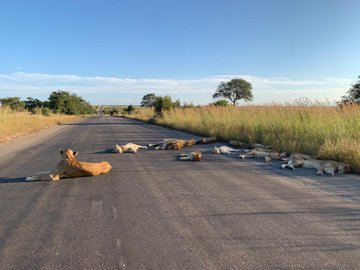 Typically, the area is busy with tourists, but not now given the park has been closed since March 25, according to CNN. The country has been in a nationwide lockdown since then.

“Lying on the road during the daytime is unusual because, under normal circumstances, there would be traffic and that pushes them into the bush,” park spokesman Isaac Phaahla told the publication.

“They just occupy places that they would normally shun when there are tourists,” he continued. “People should remember that KNP is still a largely wild area, and in the absence of humans, wildlife is more active.”

South Africa isn’t the only country seeing wildlife taking over.

In late March, a pack of wild mountain goats was seen in a small community in Wales.

The seaside resort town of Llandudno is typically rammed with tourists each summer, but the COVID-19 outbreak has forced everyone indoors and left plenty of room for visitors of another kind.

Locals posted several photos and videos online of roughly a dozen wild Kashmiri mountain goats wandering around downtown Llandudno, where they could be seen hopping on benches and capering around on the pavement over several days.

One video shows the goats treating a retaining wall like a cliff face, standing precariously on the edge while munching on the scruffy grass growing between the stones.

Another video shows the goats wandering through a deserted downtown roundabout intersection.

“They are curious, goats are,” town Coun. Carol Marubbi told the BBC. “I think they are wondering what’s going on like everybody else.”